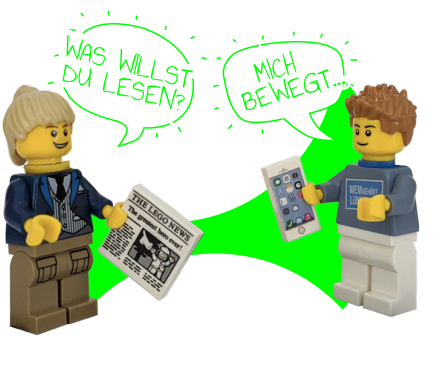 Though listening is increasingly regarded as a useful tool in journalism, we don’t see that it’s considered a core activity. The exceptions are telling. One is the Dutch startup De Correspondent. It’s been thoroughly maligned recently for its botched entry into the US-based English-language market. We think that’s a shame, because its initial and striking success in its home market demonstrates a coherent method that remains of deep interest. The journal is one illustration of a point made by former research director Emily Goligoski of the Membership Puzzle Project: “Understanding the audience opens doors not only to financial sustainability but also to editorial innovation and inclusion.”

De Correspondent’s founding editor, Rob Wijnberg, discovered when he worked at the Dutch newspaper of record, NRC Handelsblad, that readers thought the paper’s coverage was excellent, except in the areas that readers knew well personally. That shouldn’t be surprising. A master’s degree in journalism hardly makes a young reporter an expert in particular industries, and experienced reporters left us or were forced out in droves over the past two decades.

Instead of trying to make reporters expert in various subjects, De Correspondent invited its expert readers to contribute to the reporters’ work in secure spaces called “gardens”, open to customers only. Thus, journalists and their audience can learn and grow together. De Correspondent doesn’t have subscribers, it has “members”, a core idea that is also part of the value proposition: The journal says that it serves only its members. Here’s the pitch to prospective members:

“News as we know it leaves us cynical, divided, and less informed. Together, we can change that…. Join us and be part of a global community committed to collaborative, ad‑free journalism.”

The pitch includes specific services and points of contact:

A key point: members are asked to contribute the sum they consider “just” for the paper’s contents and other services, which offers tremendous insight into what the paper’s users find valuable and why. (De Correspondent pledges that it will never share or sell its members’ data, and that there will be no policy change without their permission.) They are invited to events where they can exchange with reporters and management. These events formerly included book launches, but in 2019 De Correspondent announced it was closing this activity, though profitable, to focus on its reporters’ interactions with members. That tells you just how valuable those daily interactions have been to their success.

As for the notion that every contact should be an opportunity to communicate the value of the enterprise, here’s a small but telling example:  When De Correspondent’s reporters go out on interviews, they leave a card that includes, on the back side, a free trial offer.

We repeat: This is only one method of listening, but it ticks the essential boxes. At one point De Correspondent envisioned packaging its member engagement strategy as software, but at this writing we have not seen that project emerge to the market. We can say this: If they could do it, so can others, on their own terms and design.

Another successful method originated in South Korea, where the Korean Center for Investigative Journalism – Newstapa, a video-based newsroom, became the first and most successful nonprofit investigative center in Asia by recruiting about 40,000 paying members. It’s a powerhouse investigative unit, which played a central role in the downfall of the country’s then-President, Park Geun-hye, on corruption charges. But even before that blockbuster story, Newstapa set about building an engaged and collaborative membership base.

The enterprise began by producing text and video stories, which became its chief marketing tool. Its founding editor-in-chief and chief executive of the center, Yongjin Kim, believes firmly that “you must create the offering before you sell it.” Immediately thereafter, Newstapa began holding monthly meetings with its members, where they were shown upcoming stories and asked to comment or propose new projects. (Unlike De Correspondent, the high stakes of Newstapa’s reporting precluded open exchanges with members about ongoing investigations. Their version of listening, likewise self-invented, necessarily took a different form.)  This activity represents a significant investment for the organization. A space adequate to hold the members – not all of them at once, but up to several thousand – must be rented, staff must be hired or assigned to manage and promote the event, and work in the pipeline must be ready on time for the core audience. So, what is the return on investment for everyone concerned – the audience, as well as Newstapa?

Put aside for a moment the question, “Does listening directly contribute to measurable return on investment?” Instead, let’s ask: How will you know whether you are meeting the needs of the people you serve without ongoing and persistent interaction and inclusiveness? From that standpoint, listening to your customers is a proven way of ideating, testing and – once you have something that people like and works – marketing your efforts. The procedure is common in virtually every industry except journalism.

How do we know that listening will grow our industry? There are three answers. The first is that not doing so became standard practice as our industry began its slide, and remained so till the situation became desperate. The second is that a number of successful start-ups – like CodaStory, a leading media on the disinformation crisis whose first focus was on gay rights in Russia; Devex.com, which serves the global development industry; and responsible-investor.com, the voice of corporate social responsibility – consistently improved the match of their content to their communities by monitoring their needs. Finally, there are substantial clues as to why and when listening works or doesn’t.

In our next newsletter issue we will look into another case study. But first over to you:

How do you listen to the people you serve? What do you do to guarantee your audience’s interaction and inclusiveness?

If you want to talk about your listening experiences, let us know. We’re always looking for cases to study and write about: dialogger@tactile.news

Excerpted from Community-Powered Journalism: A Manual for sustainability and growth in independent news (publication pending; copyright 2018-2020 Davis and Hunter, all rights reserved).